"...I pressed my luck. In his opinion, how did the Zanden hold up against the latest and greatest number crunching assaults from the inventors of the RingDAC and Mr. DSD himself, Ed "the man" Meitner? Nadel grinned and reassured me that, though going about things in exactly the way I had come to identify and cherish, Yamada-San's recipe was indeed still "right up there", directly competitive with these other makes. For what that's worth, it suggests that by inference, the T200 Level-1+ player must be included on this list - and clearly ahead of the MkIII when mated to my transport and digital cable without the AR2000. Bloody impressive.

And remember, this is for RedBook performance! In any comparison with the Zanden, that's all you may consider. Today's one-box player is thus a no-compromise CD player. It happens to also do SACD; give you two personalities for each; and all of that probably for 1/3th to 1/5th the price of the two/three box competition if you factor their associated necessity for stand-alone high-quality transports. In its one-box category, there are the Nuvista and Trivista pieces to consider. Any which way you slice it, rarefied company indeed." 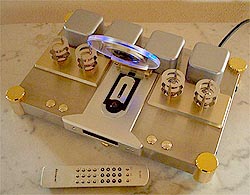 "... The combination of her vocal quality and piano playing had a natural sound that made me feel as if I were in a smoky jazz club somewhere. It had a level of naturalness I've never heard in my listening room before, one that my reference player, the Sony DVP-NS999ES or Arcam FMJ CD23, can only dream of achieving... the Shanling CD-T100 with the Level 1 Modification delivered impact, pace and powerful bass response rivaling any solid state CD player I've heard in my system. Eminem and Steven Tyler's voices had clarity and a level of smoothness that neither of my other players were able to achieve..."

"... With pre-delivered and to-die-for build quality, the Shanling T-100 Level 1 Mod machine becomes a high pedigree beaut all around... Mark my words - overlooking it as just another pretty face then would be a big (and likely very costly) mistake. Disregard its 24/96 upsampling and be prepared for a very smooth, "non-digital" sound that does all the audiophile things you expect. Far more importantly, it allows you to forget about them to get intimate with the music and relish in it, the audiophile judge disbarred from the district... were you to assign percentage points and call the Cairn/Jolida as occupying opposite poles in the high 80s range, the Cairn with a slight lead, the Shanling would belong into the 93 band, with the Zanden sans ultra transport occupying the 95 marker as the best Redbook I've yet heard. Each measely point in these rarefied strata is obtained at great cost..." 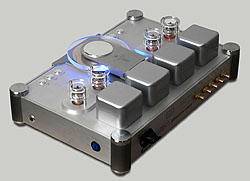 "... To say that the Shanling SCD-T200 Level-1 player was attractive would be a massive understatement. With its high-tech appearance, utilization of superior parts and materials, exquisite attention fit and finish, the Shanling is simply a stunning piece of artwork. It commanded attention from everyone who was within eyesight of this component, but this would be irrelevant without its stellar performance to match its aesthetics. With both SACDs and Redbook CDs, the SCD-T200 is a reference quality performer. SACDs simply sound awesome, lending the music a sense of realism and palpability that is enthralling. On conventional CDs, the performance is equally if not more impressive, considering the confines of the format. The Shanling's ability to extract the most out of a 16bit/44.1kHz source is extraordinary, giving new life to much of my CD collection. The SCD-T200 also gives the user welcome flexibility with two output stages, vacuum tube and solid-state, each with its own strengths and characteristics. By utilizing the volume control on the excellent remote, I was able to obtain world-class performance by directly connecting the player to a stereo amplifier. Its sonic strengths are many, with the only major caveat being that you are unable to play multi-channel SACDs or any DVD-Audio discs. For those who are normally wary of purchasing modified electronics, rest assured that this is a covered by a 1 year factory warranty mod with a one-year warranty. And though it may not accommodate every silver disc you own, what it does play is extremely satisfying and fulfilling. This player's superior performance, combined with its stellar appearance, is an absolute knockout. Coupling this with undeniable pride of ownership, the Shanling SCD-T200 Level-1 SACD/CD player is a worthy candidate for anyone seeking to assemble the ultimate two-channel SACD/CD playback system..."