The world's best turntables use Soundsmith because they've been designing and hand-building the world's best phono-cartridges for more than thirty years.

Advantages to the Soundsmith design
To hear everything that is on the record, the stylus MUST stay in constant contact with the groove. After all, if you don't read all the words, you won't get the story ! How does this happen?

Soundsmith Fixed Coil vs. Moving Coil – what are the advantages of the fixed coil technology?

> FULL SIX SIDE SHIELDED design for the most noise and hum free cartridge designs possible (Faraday shielding) - far superior noise and hum rejection to any MC or MI or MM design.

> Flexibility of output levels without changing other design and sonic signatures.

First and foremost, the most important difference one can achieve with a properly designed “Fixed Coil” cartridge is by dramatically lowering the moving-mass of the system – specifically, the generator inside the cartridge that must be moved at incredible speeds, stopped, and reversed in direction. Up to 20,000 times per second. This is an impossible task to perform perfectly, and no cartridge works perfectly as a result of the mass that must be moved. The problem is as simple as that - mass, and the laws of inertia. The degree of accuracy between cartridge technologies is just that - a matter of degree of accuracy - in large part determined by the moving mass of the INTERNAL generating system.

How does Soundsmith’s Fixed-Coil technology compare to moving coil in this extremely critical area? Fixed-Coil technology allows, by elimination of a design barrier, at least 5 times less internal moving mass. The physics of this translates into 10 times better performance due to lower stored energy in “angular momentum” – the direction of the angular internal movement of the internal generating system of any magnetic cartridge. 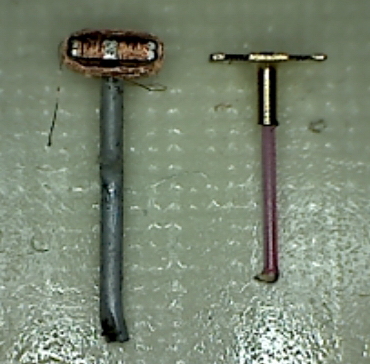 On the left is a relatively SMALL Moving coil armature, the right is the LARGESTSoundsmith tiny permeable flux modulator. You can see by the obvious size differences that the moving-coil system has far greater mass, which means much higher inertia. That is a bad thing.

A large amount of mass in the moving system is greatly detrimental to the performance of phono cartridges. One obvious reason is the simple aspect of just getting the mass moving; then reversing its direction quickly up to 20,000 times per second. The more mass, the more stored energy, and the longer it takes to get it moving (and the more difficult it is to reverse its direction). AND the more REFLECTED energy back down to the stylus, which causes stylus jitter. What does THAT do? Loss of details. Groove noise. Less enjoyment of the music. 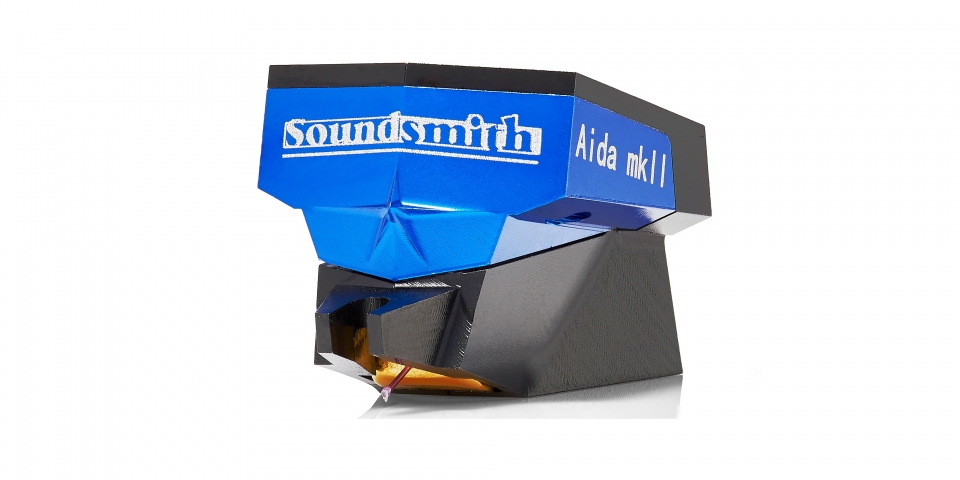 Our favorite and maybe the best buy in the line

A triumph of Soundsmith Engineering, Stereophile Class “A” rated, a rarity at its price point – and for good reasons.

The Aida employs a Laser drilled Sapphire Cantilever and an ultra-low mass Line Contact Stylus.  This configuration resolves the challenges of playing the inner grooves with the same level of confidence as the outer. How did they do this? The unique stylus shape of the CL stylus has a “sharper” playing surface on the faceted diamond, allowing it to ride easily in the groove modulations of even the most difficult passages and high frequency information that other cartridges simply cannot trace. The result - a truly superb cartridge, surpassing top MC designs with air, focus and sound staging no cartridge at this price should be able to achieve. - - The Aida features a 2 year warranty to the original owner.

Inspired by Frank Schröder, designed and individually hand made by Peter Ledermann, Soundsmith's Sussurro is a cartridge designed to specifically address the most intricate and critical issues of cartridge design. The new MKII Sussurro has a newly designed moving iron element to reduce moving mass by 70%; extremely low stored energy, the new MKII damping system and an innovative energy distribution path to effectively transfer mechanical energy away from the cantilever through the cartridge body into the tone arm. So what does all this mean??

Low jitter. Jitter? You probably thought that was a term reserved for digital systems. Not so. Stylus jitter is responsible for loss of detail, and making a cartridge sound, well, like a cartridge. The Sussurro stays in constant contact with the record groove. If you are not in constant contact, you can’t hear what has truly been recorded. 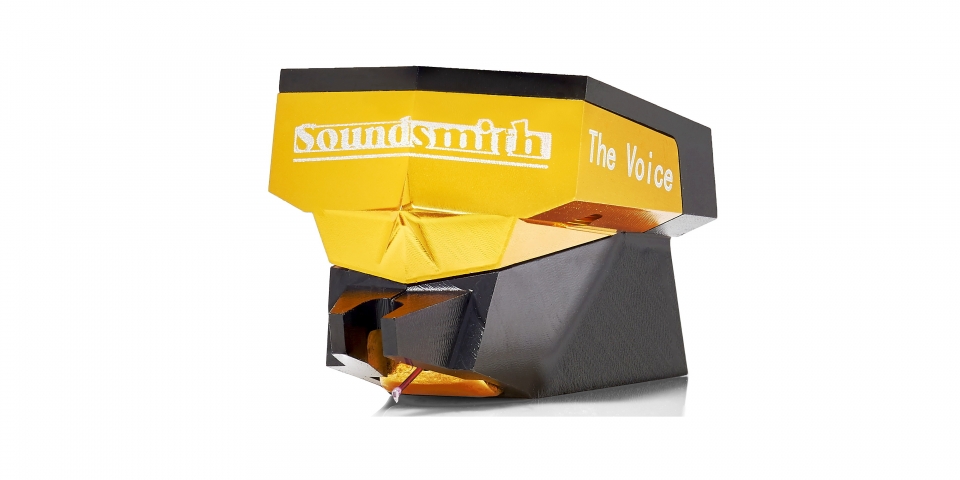 "The Voice will wring every last drop of performance from it at a price that, in a world where most competitors go for two, three and four grand (up to ten large), is extremely reasonable and probably a great bargain. It is easily a reference quality cartridge with the added edge of being supremely musical, which is why Peter is going to have to pry this thing from my cold, bloody hand to get it back!"- James Darby, StereoMojo -

Since its introduction in 2009, The Voice has won numerous "product-of-the-year" awards and is – in Peter Ledermann’s words –"probably the best High Output cartridge in production today." Our design goal was to produce the lowest moving mass high output design possible using novel and advanced technology. Featuring a single crystal Ruby Cantilever and our Optimized Contour Line Contact Stylus, we developed a specialized metallurgy for the low mass moving iron system.

A cartridge that disappears. After all, if it sounds like a “record" it’s wrong. The cartridge should bring your directly to the performance; not stand between you and the music. 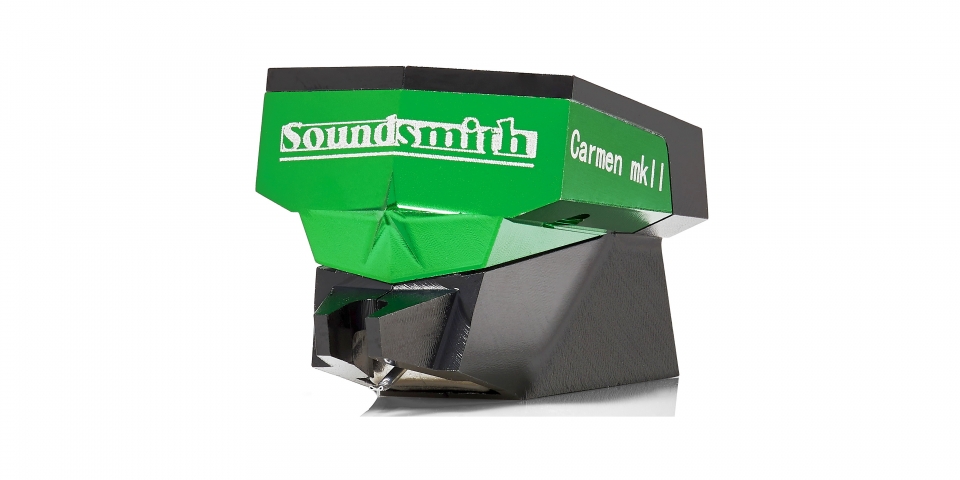 Welcome to the next level
At this point, I've played hundreds of records with this ebony-bodied wonder, and I think I'm finally starting to grasp some of the inner beauty of Peter Ledermann's inventions. -
https://www.stereophile.com/content/gramophone-dreams-4-0
Created out of the desire to make a very high performance design at an affordable price, the Carmen mk II was crafted to have unparalleled purity of tone and ultra-smooth presentation. Just slightly lush with a well-developed midrange, the Carmen is surprisingly pleasing and will seduce you into long, late listening sessions.
The stylus used is a large part of what makes it special; an ultra-low mass occlusion free nude diamond cut and polished into a true hyper-elliptical shape. The combination of low tip mass and the Fixed Coil design gives the Carmen a tremendous resolution advantage over MC designs selling for more than twice the price. Housed in a handmade solid Ebony case, the Carmen delivers.